Maztec. Trademarks and visuals belong to their rightful owners.

Maztec is easily one of our biggest, recent board game discoveries. We have a sweet spot for games that try something really new, and go beyond what you’d expect from a regular Kickstarter funded title. Merging genres into mixes that sound insane on paper made many cult status games a reality and led to tons of other, similar projects. Maztec also goes the innovator way and shows how creative you can get when mixing two seemingly different hobbies.

Let’s begin with the story. A peaceful and rather calm world witnesses a phenomenon no history books or the wisest people know of. Science can’t explain it. Everything happened during the course of one night. The earth began shaking, almost like a huge scale earthquake. People all over the world have felt it and their closest environment suffered a lot because of said disaster. From the scarred land strange structures emerged and all it took… was a single night.

What are they? Nobody knows but the biggest one has many resemblances to temples and seems to be the source of all the shaking. Will you dare to enter its premises, investigate it and put an end to everything that’s happening? And remember: with all these disasters we may be a step from the end of the world as we know it. Better hurry.

The temple itself turns out to be quite mysterious. Shiny gems and highly bizarre symbols are all over the corridors and halls. Do they have any meaning? Only your own exploration will tell.

Why is Maztec such an interesting experiment? It takes two, seemingly different tabletop hobbies and merges them into one. First: jigsaw puzzles with over 250 years of history. Putting these together gives so much satisfaction when completed, and tries your brain cells like nothing else.

Then the second ingredient: board games. But how do you exactly combine the two? Sure, there are some tile placement games (e.g. from the adventure genre) that make you combine the squares but they’re nothing like jigsaw pieces.

Maztec takes place in a mysterious temple and all players try to complete the building with its elements which are (surprise, surprise) made of aforementioned puzzles. And they’re not regular puzzle pieces. Each of them is two sided. One side contains a little bit of hints while the other various symbols that might help you know if your pieces are a good match or not. Curious? Let’s share what we know about the gameplay in more detail.

Maztec can be played in a group of up to 4 players. If you prefer playing solo, it’s possible and the variant is fine. No matter the player count you need to rebuild the temple as fast as possible. The game represents this by giving you exactly 28 turns to do it and otherwise: it’s a game over for each and every single player

When starting the game you take four unique Temple Pieces which create the entrance to the entire area. This is where your adventure begins. Like most pieces, they have some symbols and gems. We will talk about these soon. Second come the 28 Game Turn Pieces which have turn numbers printed on their backs. You have to sort them so that they start with “1” on top and are in order.  Next are the 38 Gem Pieces divided into two stacks (green gems and red gems). When all the piece stacks are on your table: take 2 red and 2 green gem pieces and put them face up near their stacks. Then draw one gem piece of each colour and you’re finally ready for the grand adventure.

The turn begins with drawing a new Turn Puzzle Piece. These aren’t too surprising as they are numbered and contain the borders of the temple. These make the game fast and grant more options to players when placing their own pieces.

When it’s time for your turn you have to pick between two things to do. If you don’t like the pieces available for taking, discard them and place new ones there. Next pick one of these. The second action is just to pick one Gem Piece. Whichever you’ve decided to do, your new possession has to be connected with another jigsaw puzzle piece: a Temple one, one owned by another player or these located in your own player area.

So how do you win? Well… first: don’t let the turn limit run out. Whoever has no gems in front of him (lone or combined with other gems) anymore becomes the winner.

Assembling the entire thing is by no means easy. Symbols have to fit and gems do too. Figuring out how to do it properly is a real challenge for your brain cells, especially with a scheming opponents on the same table. Backs of puzzle pieces have lines that can hint at whether you’re assembling everything the right way, but the game is still quite complex for a title that can be completed in 40 minutes.

The Kickstarter campaign for Maztec is up and running and there is still about a week to back it. There are a few editions available. The core game comes at $32 and if you want an expansion to go with it: you can get the basic game with “The Power of Gems” for $44. The expansion introduces cards that mix up the gameplay quite a bit. You get variable powers with Hero Cards, gems have much more properties and certain chains can combo into some crazy actions. Not to mention the amazing quality illustrations used here.

We highly recommend Maztec as it not only goes outside regular genres and tries something new, but also works as a fantastic, fast game that is great in solo and multiplayer modes equally.
>>> Campaign Link 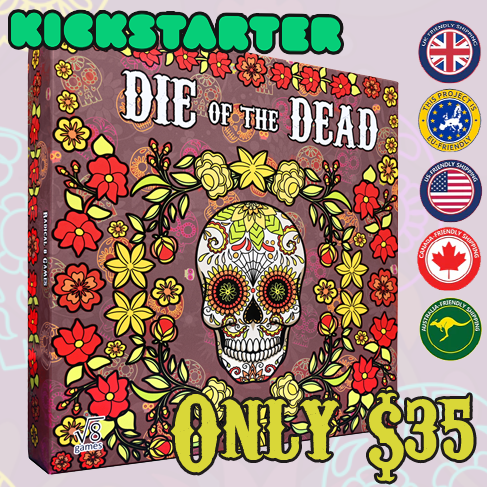